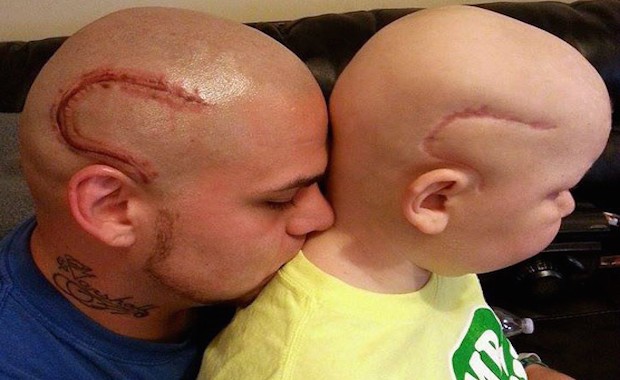 A 28-year-old Kansas father’s touching gesture of solidarity with his son has gone viral since Father’s Day.

Last year, Josh Marshall’s 8-year-old son Gabriel required surgery to remove a malignant brain tumor. The heartbroken boy told his father he felt like a “monster” due to the large, twisting scar the procedure left on his head.

Marshall decided to get a tattoo matching the scar in order to show solidarity with his son. “This broke my heart. I told him if people wanted to stare, they could stare at both of us,” said Marshall.

Marshall’s tattoo was completed in August 2015, however his story has gained public recognition since he entered the St. Baldrick’s Foundation’s #BestBaldDad competition on Father’s Day. The competition showcases fathers who’ve shaved their heads in order to show solidarity with their sons who are undergoing cancer treatments.

Marshall was named winner of the competition, according to the foundation because he “went above and beyond shaving his head in solidarity with his child and got a tattoo to build his son’s self-confidence. It’s a truly touching story.”

The victory led to numerous news sites, including ABC and Buzzfeed, picking up Marshall’s story.

For his part, the proud dad is surprised at how his family’s story has blown up.

He told ABC News, “I never intended for it to be this big. It was just a friendly competition between fellow cancer dads and people showing support for their loved ones who have fought cancer.”